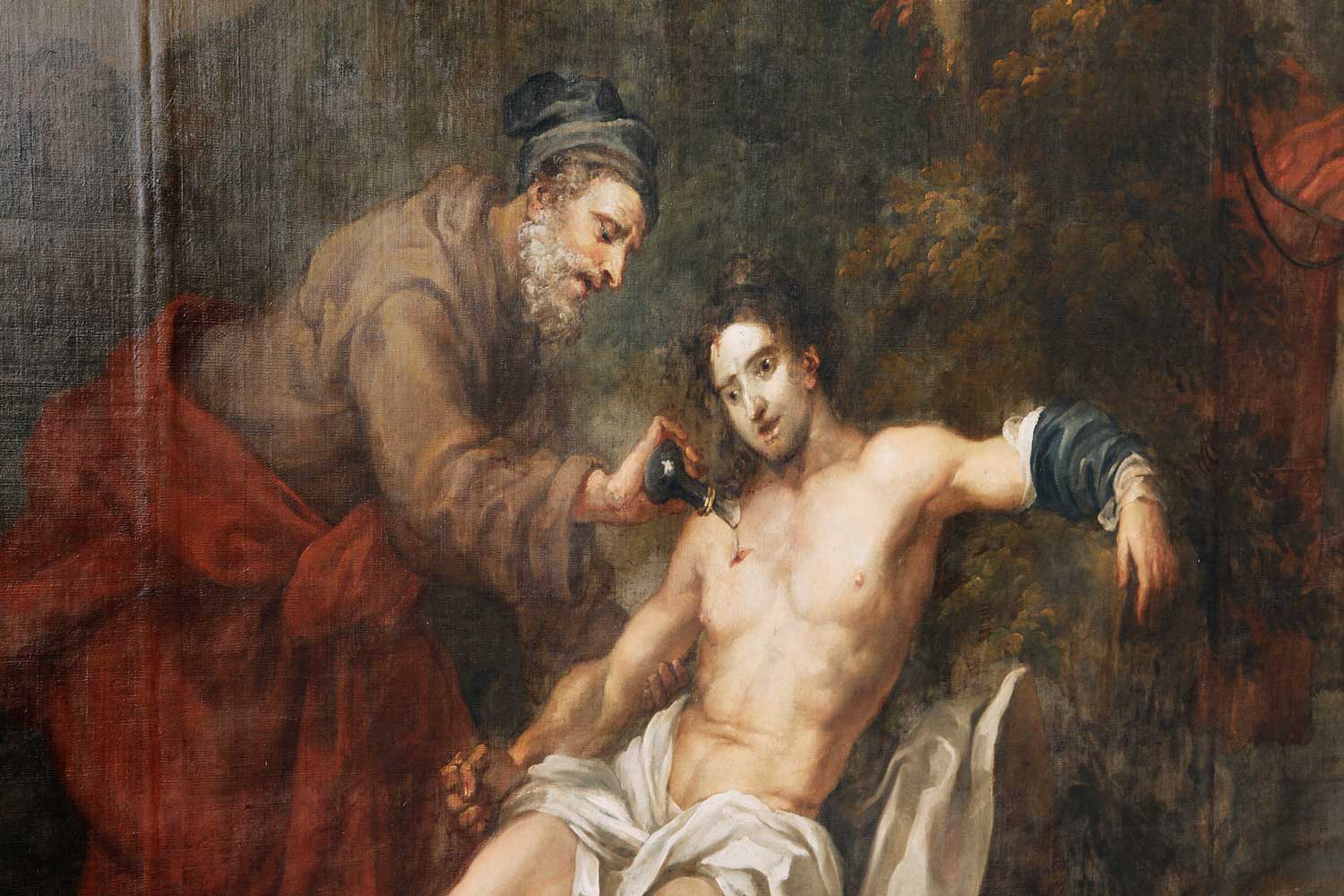 The walls of the Hogarth Stair are decorated with two huge canvases by William Hogarth –widely known at the time for his popular engravings, and a little less so as a portrait artist.

The Good Samaritan and The Pool of Bethesda were Hogarth’s first history paintings – depicting stories from the bible at huge scale, featuring figures around seven feet high.

Hogarth decorated the stair free of charge, allowing him to indulge his ambition, and giving the hospital a grand entrance to the Great Hall at no cost.

The Pool of Bethesda

The Good Samaritan depicts the biblical story with the Samaritan pouring oil and wine into the wound of the injured man, a first century practice that continued until the 16th century. In the foreground, Hogarth has added a dog licking a wound on its leg, presumably sustained during the traveller’s attack. In the background, we can see the priest who, having ignored the victim at the side of the road, has continued on and now has a man lying prostrate at his feet.

Rahere also appears, asleep and dreaming alongside a tableau of the laying of the hospital’s foundation stone and the depiction of a sick man being carried on a stretcher into the old cloister of the hospital, where he is met by the brethren of St Bartholomew. The depiction of the old cloister is probably accurate as, having been born and raised in Smithfield, Hogarth would have seen it for himself when he was younger, before it was replaced.

The decorations surrounding the canvases were added by Hogarth’s students and include the medallions of Galen and Hippocrates and baskets of flowers. These embellishments frame the canvases in a more typically Georgian style.

The Good Samaritan was painted on site, with scaffolding erected so that the artist could reach the full height of the canvas. It was completed in 1737. 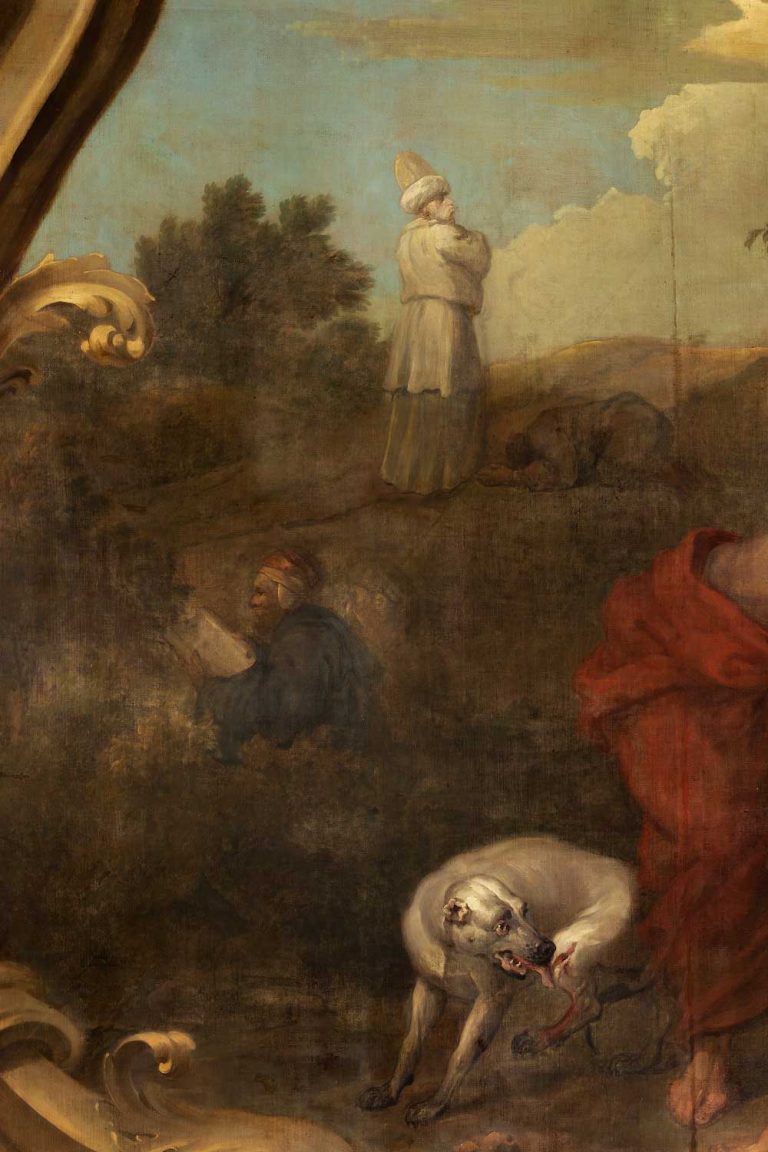 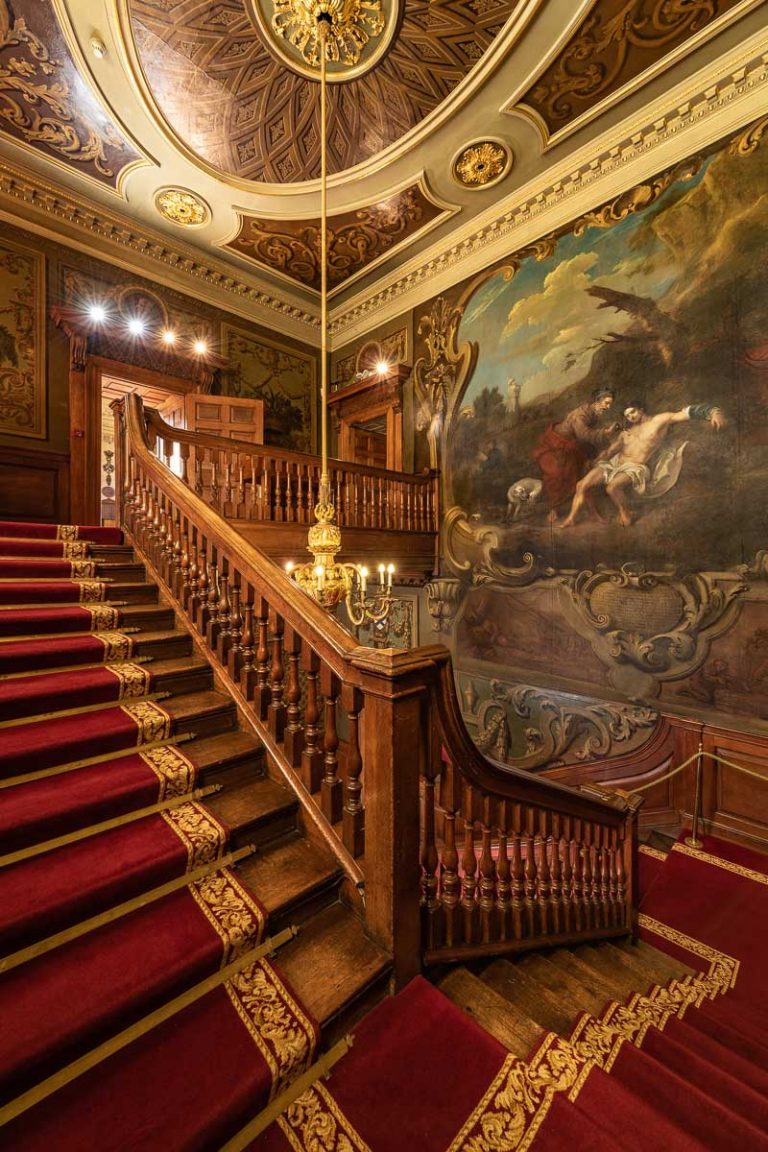 The Pool of Bethesda

The painting shows a scene from The Gospel According to St John, in which a man that has been unable to walk for many years is healed by Jesus. Much like St Bartholomew’s temple on The Tiber in Rome, Jerusalem’s Pool of Bethesda was thought to have healing properties. On occasion, the water would become disturbed and this was believed to be by an angel, who can be seen at the top of the painting, departing having made a pass over the water. Whomever entered the pool after the waters had settled again would be exposed to its healing properties.

The Pool of Bethesda was started in a studio in St Martin’s Lane before being hung on the staircase in 1736. The arches and landscape that surround the pool, where the sick have gathered to be cured by Jesus, are strongly reminiscent of Italian art of the period but the individuals depicted are strikingly original and the portrayal of Christ is often considered to be one of great dignity. Although we know the figures were painted by Hogarth, George Lambert – who made his name from painting scenery at Covent Garden – is thought to have painted the landscape (and possibly the background in the Good Samaritan).

The Hogarth paintings have always needed care. Twelve years after their completion, it is noted in the Governors’ minutes that they were already in need of cleaning, and that Hogarth was to be consulted as to how this would best be done. The artist had them cleaned at his own expense two years later in 1751. Hogarth had specifically requested that the completed canvases never be varnished, but when they were cleaned in the 1930s, seven coats of varnish were removed. As an indication of how much dirt the paintings accumulate, when they were again cleaned in the 1960s it was only then that the inscription in the foundation stone in the second tableau was discovered.

The paintings are still used as an educational tool as the characters portrayed are thought to be patients from the hospital, many of whose conditions are recognisable to the trained eye. None of the illnesses are exaggerated, perhaps unusually for an artist known for caricatures, and reflect a handful of illnesses that would have been seen regularly at the hospital at the time. 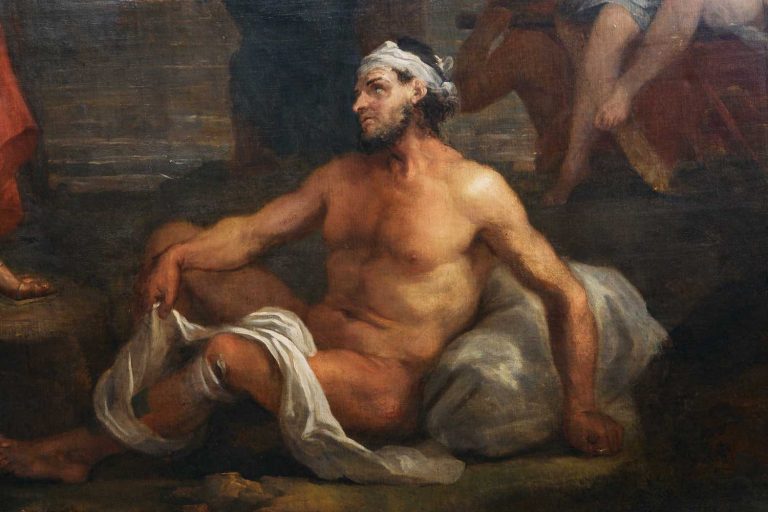 The central protagonist is the man unable to reach the pool to be healed on account of a chronic ulcerous wound on his leg.

He was alone and no one would help him to the pool’s edge. Jesus took pity on him and healed him without the need of the water’s powers.

It has been suggested that he is suffering from Myotonia Congenita causing enlarged but weak muscles and ulcerous wounds. Others hold that it is a reflection of the influence that Hogarth took from the classical style of painting. 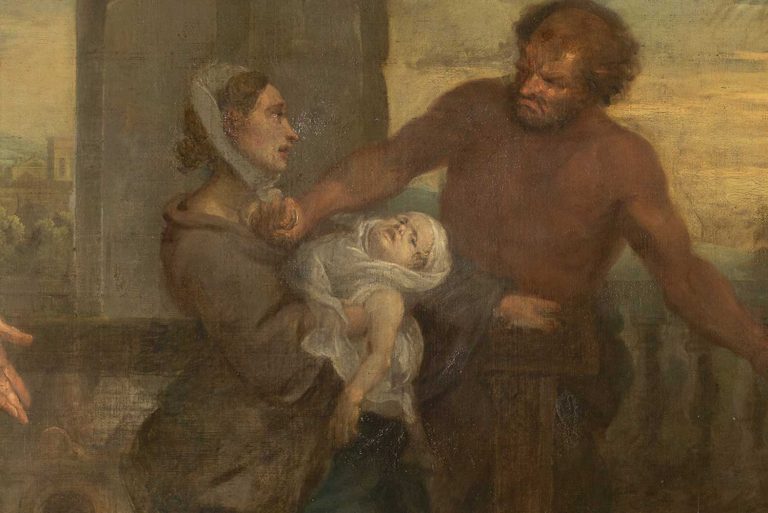 A mother holds a child with rickets depicting the pronounced forehead, curved spine and inflamed joints of the disorder as described in the 18th Century.

The fidelity of this portrayal may reflect Hogarth’s friendship with John Freke a surgeon at Barts who trained Percivall Pott’s mentor, Edward Nourse. Freke had written on the subject of rickets in 1748 and may have provided Hogarth with the information and possibly even a model for its accurate portrayal.

Although a diagnosis of rickets certainly makes sense, others have suggested the differential diagnosis of congenital syphillis – common in Hogarth’s time and an illness that would also fit the bill. 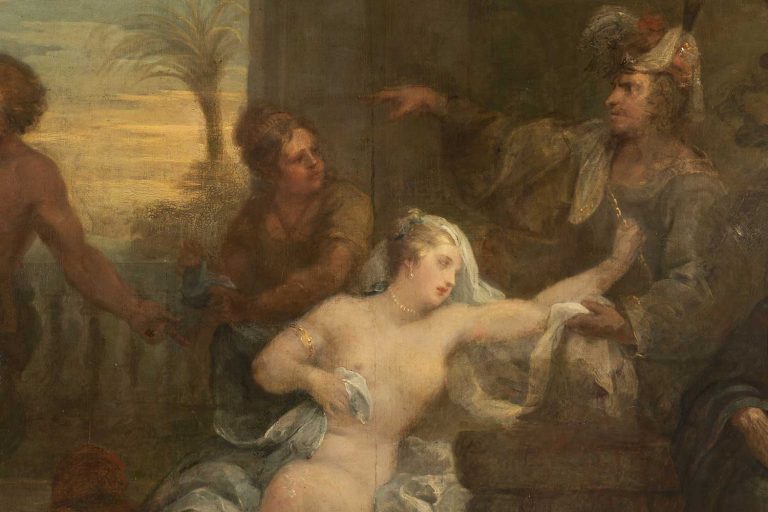 The general state of undress of this young lady and her wanton pose has led many to assume that she is modelled on a famous prostitute of the time. Regardless, she seems to be someone of means as her maid appears to be providing the tough looking gentleman at the back with financial recompense for restraining the lady with the baby, so that her mistress can get in front of her in the queue.

There is not a huge amount to go on in terms of a clinical examination here, however, there is the suggestion of psoriasis affecting her knees and one elbow, which combined with a possible arthritis of one knee and her chosen profession, might point to a diagnosis of gonorrhoea. 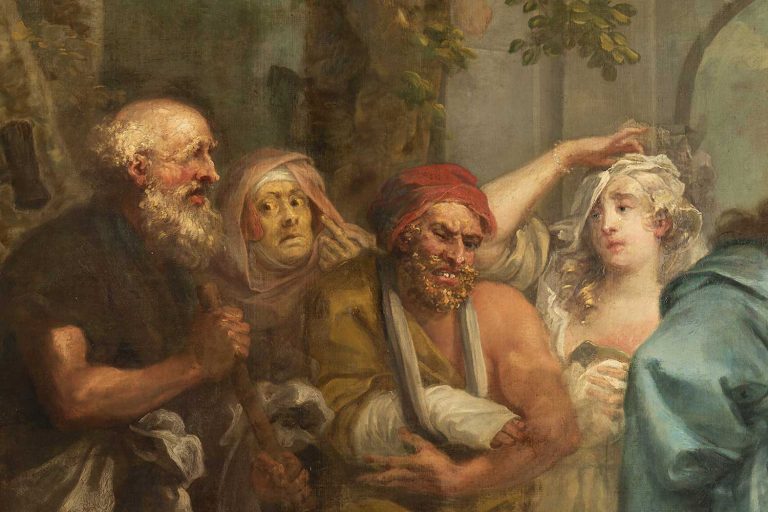 At top left is a man with gout whose arthritic and sore hand seems to have been accidentally hit by the cane or staff of the blind man next to him.

Behind and in between these two is a character who had always been thought to be suffering from jaundice. More recent observations have suggested a diagnosis of melancholia or major depressive disorder. A good doctor will tell you that jaundice and depressive disorders are common together and that one is certainly not exclusive of the other.

Also in this group is a woman with an inflamed breast, again possibly a reflection of his connection to Freke who had written on breast cancer and its surgical treatment, whilst others have suggested she is suffering from mastitis. 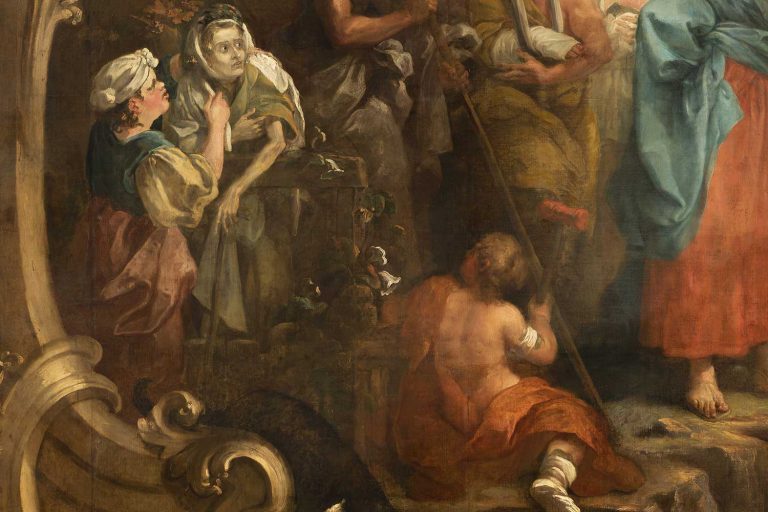 The left of the painting depicts obesity and emaciation or hypertrophy and atrophy, in a young girl and an elderly woman respectively.

At the feet of this group to the left is a young man. His prominently curved spin, crutch and bandaged limbs have led to suspicions that he might be suffering from rickets. 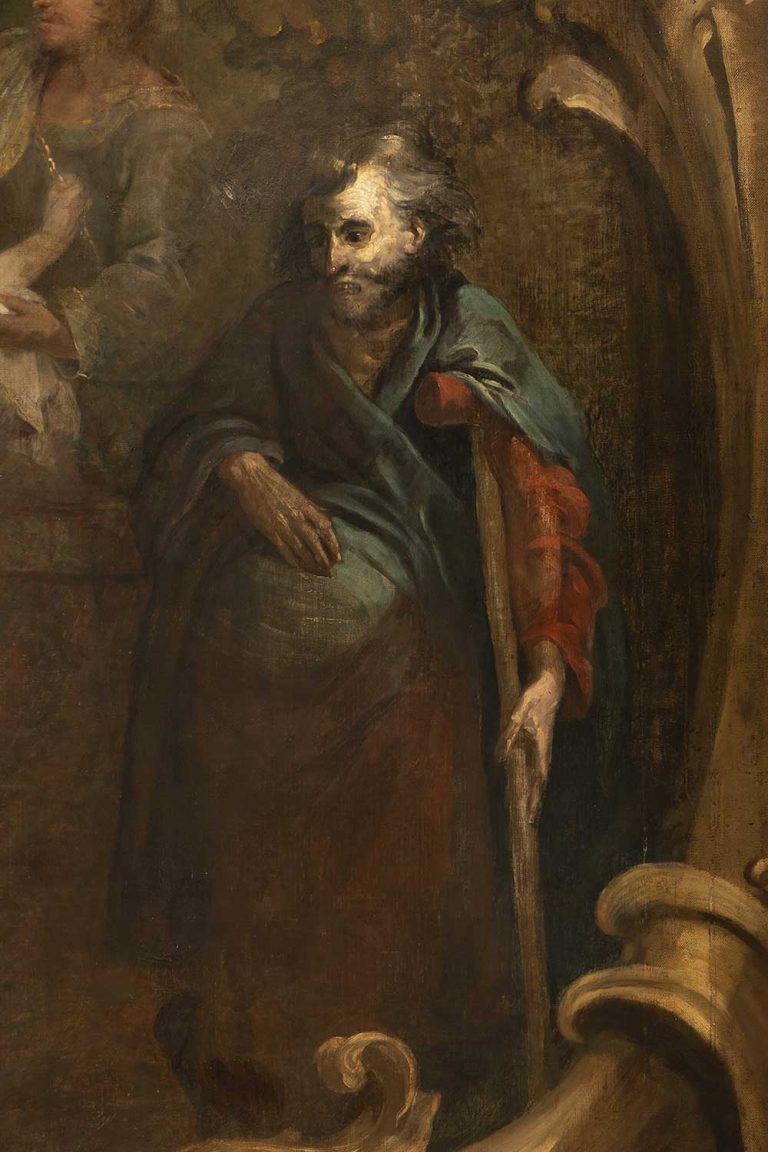 To the far right an elderly man has been the subject of varied clinical observations over the years. Some have explained his crutch by way of a tuberculous arthritis of the knee whilst others have paid more attention to his swollen tummy. The latter observation may be ascites which occurs in a number of different conditions but here has been attributed to cancer of the liver or a disseminated malignancy, called carcinomatosis.