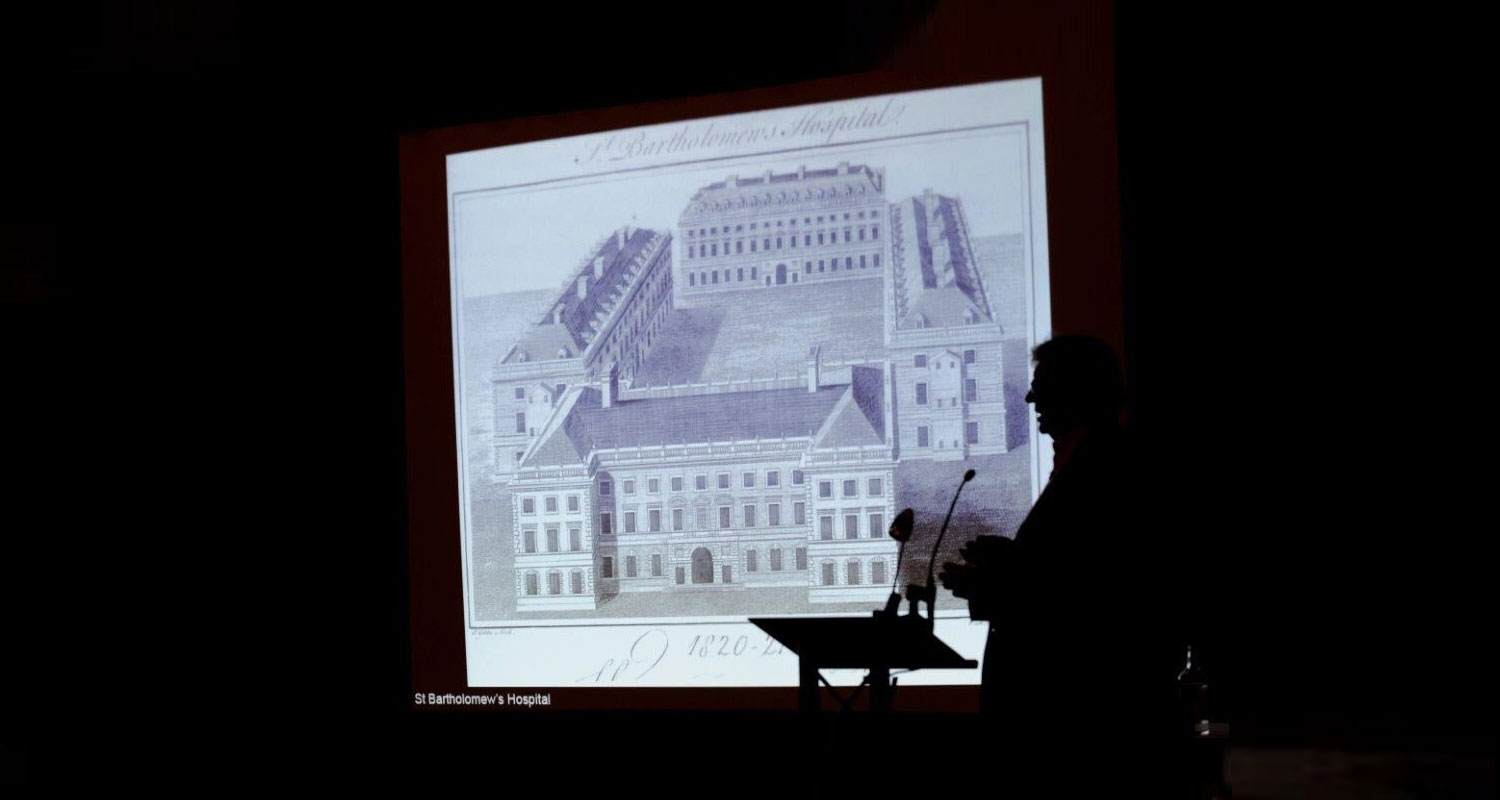 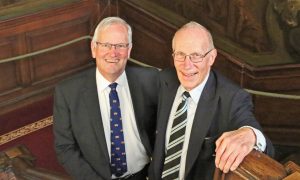 2019 saw a change in the chairmanship of the Friends, as Sir Marcus Setchell stepped down after seven years in office, to be replaced by Dr Robert Treharne Jones (pictured together on the Hogarth Stairs).

The Friends were started in 2011 by a small group of medical and nursing alumni to help preserve this amazing heritage in the heart of London. This circle of friends grew to form a central committee. The Friends have expanded to attract a following of several hundred like-minded individuals, many of whom have trained or worked at Barts but also those who are familiar with the buildings, archives and artistic treasures that are housed there. This growing number have come together to ensure that the heritage site and contents are appropriately preserved to inspire future generations.

The Friends are here to do everything they can to ensure the buildings, which continue to be used for educational, cultural, social and fund-raising activities, survive and flourish for future generations.

“The Friends’ Committee met for the first time in March 2012, following a year of inaugural events, which confirmed that there was an appetite to take the embryonic Friends’ organisation forward” said Sir Marcus.

“We embarked on a programme to support those aims, but by the end of the year it became clear that there was a major threat to the future viability of the North Wing from the Maggie’s Centre, which was supported by the Hospital Trust.”

“The Friends became the sole champion of the heritage buildings, and the clear sense of purpose which underpinned our campaign ensured that our efforts in resisting hostile planning proposals resulted in major functional benefits” he added.

“Importantly, a key success was the establishment of a trust – St. Bartholomew’s Heritage – which is now up and running. Personally, I shall never forget that it was the Friends’ passion and support for the Great Hall and Archive that pushed the start button for the Heritage Trust” he concluded.

Robert Treharne Jones came up to Bart’s in October 1970, and during his student career became Captain of the Boat Club, and Editor of the Bart’s Journal (when he interviewed a new consultant named Marcus Setchell), before publishing the last edition of ‘Round the Fountain’ in 1977.

Robert went on to pursue a career in general practice in the West Country before his longstanding interest in IT caused him to start a medical software company, and he left his practice to pursue his interests in health informatics and rowing commentary. Robert is still clinical director of LumiraDx Care Solutions Ltd, and has commentated on rowing events all over the world, including the Olympic Games in Beijing, London and Rio.

“I can still remember the first time I walked into the Great Hall all those years ago and, for me, the ‘wow’ factor remains just as strong every time I walk up the Hogarth Stairs” he said.

“The Friends have done sterling work to preserve the integrity of these buildings, despite formidable obstacles which have been thrown their way, and the support of our Members has been crucial in helping maintain the momentum.”

“Visitors to the Great Hall never fail to be impressed by what is still one of the hidden gems of the City of London, and I look forward to the day when we can help restore the entire Barts Heritage site to its former glory, and allow even more people to enjoy these historic assets” he added.

Request an application form by email:

Request an application form by email: 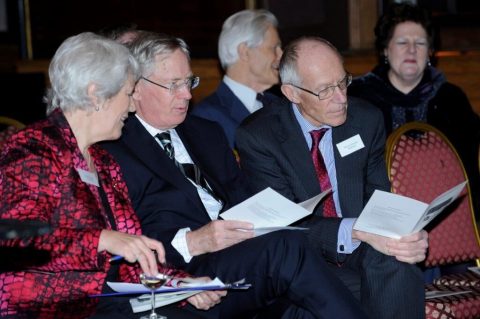 Membership has significant benefits, as Friends will:

Donations will help restore our heritage buildings and collections for the benefit of staff and visitors.

The Friends are actively seeking new members to help support the work of Barts Heritage, and to act as their ambassadors, educating and informing members of the public, and potential members, about the restoration project and its place in Barts’ 900 year history.

New members
To register your interest in membership please use the form on this page to complete your contact details.

Current members
If you are an existing Member and have any queries or wish to change your contact details, please send us an email.