First Baronet of Hancox, Moore attended Barts to study comparative anatomy after being rusticated from St Catherine’s, Cambridge. He was president of the Royal College of Physicians, Librarian to The Royal Society of Medicine and was appointed a Governor to Barts on his retirement. He was a prolific author – his greatest and most personal work being the substantial History of St Bartholomew’s Hospital, published in two volumes in 1918. The history of the hospital was of great fascination to him and the subject of his Rede Lecture, delivered in 1914.

Surgeon to Edward VII’s household and subsequently Surgeon-in-Ordinary to George V, Bowlby served in both the Boer and First World Wars. In the latter he was Adviser on Surgery in France for the British Area and the Front. He served three years as the President of The Royal College of Surgeons and delivered the Bradshaw Lecture on ‘Wounds of War’ in 1915.

The first doctor to investigate the effects of the poison gas attacks of World War I. He was knighted in 1914 whilst still in service at Barts, becoming KCMG when he left the hospital. He was Warden to the Medical College from 1916-19.

House surgeon to Sir Anthony Bowlby, Girling-Ball subsequently specialized in urology. During the war he was placed in command of the military wing of the hospital, which formed part of No 1 London General Hospital. He was warden of the Medical College from 1913 to 1920 and Dean from 1925, where he was instrumental in its modernisation, overseeing its affiliation with the medical faculty of The University of London, the acquisition of the Charterhouse Square site and in ensuring that the Medical College was represented on The Hospital’s board of Governors. He subsequently became Dean of the Medical Faculty of the Senate of The University of London and President of The Royal College of Surgeons.

Garrod pioneered the field of inborn errors of metabolism and discovered alkaptonuria and its inheritance. Combined with his study of cystinuria, pentosuria and albinism this collection of disorders is referred to as Garrod’s Tetrad.

A Barts Physiologist and the first secretary of the MRC. He is memorialized by a bust and a lecture theatre in his name at The National Institute for Medical Research.

The East Wing was occupied by 5,400 sick and wounded soldiers during the First World War when a military wing was developed in the hospital as part of No 1 London General Hospital. 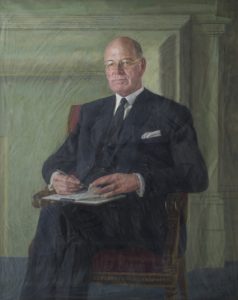 Patterson Ross graduated in 1920 with distinction in surgery and forensic medicine and was awarded the Gold Medal. At Barts he served as a demonstrator of physiology and pathology. Shortly after the completion of his professional exams, he travelled to Boston for neurosurgical training under Harvey Cushing. He returned in 1923 to join the newly established surgical professorial unit at Barts where he developed a special interest in surgery of the sympathetic nervous system. He was made Professor at Barts in 1935 and today a lecture theatre stands in his name at Barts. His patients included King George VI and Winston Churchill before he was appointed Surgeon to Queen Elizabeth II in 1952.

An Australian who initially qualified as a pharmacist in 1898, subsequently graduating from The Clinical School of the Melbourne Hospital in 1903. He performed his first thyroid lobectomy in 1907 and between 1908-1911 developed the essentials for the successful surgical treatment of thyrotoxicosis. With 230 case studies under his belt, he travelled to the USA and England, lecturing on his methods and findings. He left St Vincent’s Hospital in Melbourne in 1920 to work at Barts under Professor Gask whom he had impressed whilst serving in the First World War. In the UK, he became known as one of the leading thyroid surgeons and in 1933 was appointed to The Royal Household.

Horder’s career was made in no small part by successfully making a tricky diagnosis in King Edward VII, which led to his patients subsequently including every British Monarch up to Elizabeth II (with the exception of Edward VIII). He was an advisor to the Ministry of Food during World War II and mounted opposition to many of the proposals that Aneurin Bevan made for the development of the NHS, which led to modifications being made to components that were unpalatable to the medical profession. He was knighted in 1918 and made a Baronet in 1923.

The 800th year celebrations of the hospital’s foundation were substantial and reported in The Times, The Graphic and The British Journal of Nursing amongst other publications. There was also substantial converage in The Barts Hospital Journal, which covered the history, formal proceedings and the festivities with some fabulous photographs.

Often regarded as the founder of Clinical Endocrinology, Langdon-Brown demonstrated the relationship between the sympathetic nervous system and ductless glands. He was also the first English physican to relate works of Freud, Jung and Adler to clinical medicine, becoming an early pioneer of psychosomatic medicine.

The General Strike lasted ten days in May 1926 and was an unsuccessful effort to stop the government from lowering wages and worsening working conditions for coal miners. During the strike, medical students from Barts joined the Special Constabulary, which was not only arduous but dangerous work with one medical student being seriously injured. During the strike, The Great Hall was used by these students as sleeping quarters.

The eastern face of The Charterhouse Abbey, formerly occupied by Charterhouse School before it moved to Godalming in Surrey in 1872 and subsequently by The Merchant Tailor’s School thereafter, became the site of the Medical College at St Bartholomew’s Hospital in 1933.

Barts became the first hospital in the country to offer mega-voltage radiotherapy for cancer patients in 1937.

Celebrations took place in remembrance of Henry VIII’s refoundation of the hospital, with all the pomp and ceremony that he would have been proud of.

For the first time since Paget’s days as Warden, female medical students were again admitted to the Medical College in 1947.

St Bartholomew’s Hospital became part of the National Health Service (NHS) at the point of its inception. For the first time in over 400 years, The House of the Poore in West Smithfield in the suburbs of the City of London of Henry VIII’s Foundation is legally documented in the Saint’s name again.

Trained by Langdon-Brown and Horder, Bodley Scott became famous for his work in leukaemia and lymphoma and there is now a unit named in his honour at Barts. He was appointed physician to the Household of George VI and subsequently Elizabeth II.

Setchell began his higher education in 1961 at Gonville and Caius College Cambridge before progressing to Barts in 1964 and graduating in 1967. In this respect, he followed William Harvey’s path and continued to do so thereafter as he too was appointed to The Royal Household, becoming Surgeon-Gynaecologist to Her Majesty Queen Elizabeth II in 1990.

St Bartholomew’s became the teaching hospital for the newly-formed City and Hackney Health District, a group that included several other hospitals.

The Barts Day Surgery Unit opened in 1991 – the first of its kind in Europe.

The John Abernethy Theatre Suite opened at St Bartholomew’s – the most technically advanced outside the USA.

1993-95: Barts and The London School of Medicine and Dentistry

The Trust was renamed Barts and The London NHS Trust