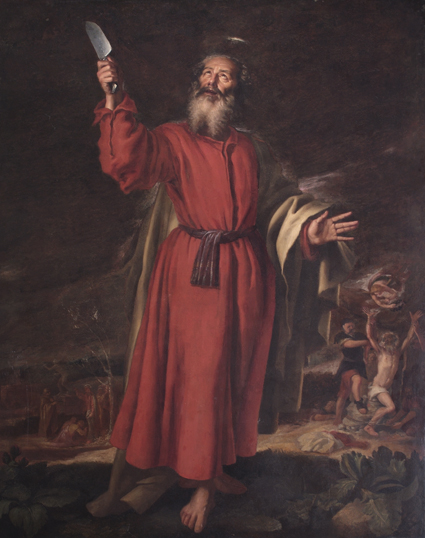 The hospital was founded, with the Priory of St Bartholomew, in 1123 by Rahere – formerly a courtier of Henry I (1100-1135). There is no Foundation Charter, however the British Museum holds a medieval chronicle ‘The Book of the Foundation of St Bartholomew’s Church in London’ that describes the early existence of the hospital. It’s a shame we can’t provide documentary evidence of the story that, in actual fact, Rahere was the court jester who subsequently became a monk. He was not necessarily a terribly ‘good’ man, as hinted-at by the author of the aforementioned chronicle, although he goes on to explain how he came to see the error of his ways.

The apex of this developing insight was a pilgrimage to Rome. He was close to the royal family and seems to have had their ear, in particular that of Henry’s wife, Matilda, who was herself pious and charitable. The timing of his pilgrimage of Rome coincides with two major events in the Royal household: the death of Matilda in 1118, and the White Ship Disaster in 1120, which claimed the life of Henry’s only son. This may have had a sufficient emotional impact on Rahere to have caused him to turn to his God, and strive to mend his ways.

Whilst in Rome, he became very unwell and feared that he may never see his own country again. He began to pray fervently, promising God that if healed, he would found a priory hospital for the sick and the poor on his return home. When well enough, he began the long journey back to England. It was on this trek that he had a vision of St Bartholomew. In this vision, the saint told him that not only must he build this hospital, but that he must also devote it to him.

“I am Bartholomew, the apostle of Jesus Christ, that come to succor thee in thine anguish, to open to thee the secret mysteries of heaven – know me truly to have a chosen place in the suburbs of London at Smoothfield, where in my name thou shalt found a church and a hospital – wherefore do thou boldly – neither at the cost of the building doubt thee not – direct, build and end this work”

St Bartholomew is an interesting figure. He is also referred to as Nathanael in The Bible (the Gospel according to John) which holds him as being present at the resurrection, and as one of the twelve apostles. His ending was grizzly: flayed alive. He is depicted in the Sistine Chapel where, as in many artistic portrayals, he looks rather as though he is carrying his overcoat over his arm. In actual fact, that beige and rather dreary looking coat is his skin.

He is traditionally associated with miracles that involve weights and measures. The most recent of his miracles was during the second world war. The fascist German/Italian regime were in search of funding for their war effort. Instruction was given that the silver statue of St Bartholomew at the cathedral on the island of Lipari should be melted down and sold. It was weighed but found to be only a few grams, and so gained its reprieve. In fact, it weighed many kilos and it is considered a miracle that it survived.

But back to Rahere…

In return for following St Bartholomew’s instructions, he would receive saintly protection for the rest of his journey home. The more scientific side of the story is that he is likely to have learned of the relevance of St Bartholomew in healing whilst in Rome, but this relevance was not in fact his, at least not directly.

On Tiber Island in Rome, a temple was dedicated to Asculepius, the healer of men. In 993AD Holy Roman Emperor Otto III had a new basilica built, which was ultimately dedicated to St Bartholomew, as his relics had been brought there from the island of Lipari. The new Basilica di San Bartolomeo inherited the old ‘medical centre’ associated with the Temple of Aseculepius, and so Bartholomew’s association with healing and hospitals began. His relics are still there in a tomb that is used as the altar. It is likely that Rahere had heard of this Church, and that in his greatest moments of health (and death) anxiety, he visited it and the relics therein.

He kept his vow and, on his return gained permission from the King to build in Smithfield (called Smoothfield at the time) and in March of 1123, the site upon which the hospital stands today was dedicated by the Bishop of London, Richard Blemeis.

The building was not without its opposition. Smithfield itself was a busy market place and the merchants had reservations about trading near a building dedicated to housing the sick, particularly given the threat of plague it might represent. Although Smithfield was not unaccustomed to death and butchery: of humans and animals alike. It was the preferred place of state-instructed execution (including of William Wallace in 1305, whose commemorative plaque today adorns the outer north wall of the hospital).

Rahere died whilst opposition continued to exist in 1143, and was buried in a tomb in The Priory Church of St Bartholomew, which he had built.

His memory is still honoured by both the hospital and the medical college today, during a procession that marks ‘View Day’ which is completed by the laying of a rose at the foot of Rahere’s tomb.

King Henry I granted the first Royal Charter to the hospital, stating that Rahere, the Prior, the Canons and the poor of the hospital fell under the King’s protection.

1180: Publication of The Book of The Foundation of St Bartholomew’s Church in London

The Book of Foundation was written by an unknown Austin Canon in Latin and published in 1180.

For the most part, these centuries are an unrecorded period of the hospital’s history. It is known that it operated as a hospice that provided care to the sick and impoverished and children, including those of prisoners at Newgate prison whilst their parents served their time. The Priory Canons are also known to have actively sought out the homeless in the city and offer them refuge, respite and care, although little of it at the time would be considered medical therapy by today’s standards, as little existed.

Smithfield was a place of execution for many years and was the site of the execution of William Wallace. In 1955, a request to install a memorial to Wallace on the screen wall of the hospital in West Smithfield was approved and the memorial, which several coloured crests and cartouches including two St Andrews flags, was unveiled on 8 April 1956.

The plaque on the wall next to that for William Wallace commemorates the death by fire of Protestant martyrs during the reign of Mary I (1553-1558). The plaque was erected in 1870 by the Protestant Alliance of London. It was supported by the Governors of the hospital at the request of the Reverend John Wright in 1868.

A third plaque, to the Peasants Revolt, which took place at Smithfield, was unveiled on the screen wall in 2015.

Mirfield was the first to be appointed ‘surgeon’ to the hospital. During this time he wrote two books: Brevarium Bartholomei and Florarium Bartholomei. The former is a compendium of medical ruminations that reflect the still widely held philosophies of Galen that were not superseded until the end of the 15th Century when a ‘modern’ camp developed around the Swiss Renaissance physician and occultist, Paracelsus. The latter publication is more ecclesiastical but does contain one medical chapter.

King Richard II’s poll tax was becoming increasingly unpopular amongst the poor. It was polarizing, not just in terms of money and dues to the state, but in terms of an understanding of freedom and individuality within society. The Revolt’s best-known leader was Watt Tyler. After assembling a group of supporters in Canterbury, they marched on London, destroying civil buildings and freeing criminals from prison as they went. Negotiations with the King were arranged to take place outside the hospital. During some unproductive back-and-forth and a bit of King-insulting by Tyler, he struck out at the well-armored Mayor of London, Lord Walworth, who subsequently cut the revolter’s throat. He tried to escape on horseback but fell and after being dragged along briefly, was unceremoniously decapitated. A grizzly end, but not as grizzly as that of John Ball, who was hanged, drawn and quartered in the King’s presence at St Albans. The two were reunited, or at least their heads were – atop London Bridge. On matching spikes.