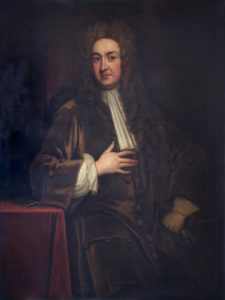 So successful were the efforts of the Governors that new plans for the rebuilding of the hospital emerged. This began with the construction of The Gatehouse by Edward Strong Junior, the son of Christopher Wren’s chief mason. It was completed in 1702 and as a magnificent entrance to the hospital, which now has Grade I Ancient Monument status.

A graduate of The Charterhouse School and Magdalen, Oxford, Levett settled in London where he was elected physician to Barts and subsequently Charterhouse, becoming an early pioneer of the connection between the two institutions. He is buried at the foot of the altar in the chapel at Charterhouse. After his death, his widow remarried to the headmaster of the school.

The 17th and 18th Century Oxford-graduated physician and politician, for whom many buildings at Oxford University are named including Gibbs’ Camera, died and bequeathed £600 to Barts in his will. His portrait, right, hangs in The North Wing and documents this donation.

The surgical trainees at the hospital submit a request to the Governors for the building of a dissecting room for anatomical lectures.

The first record of the presence of a Pathology Museum was in 1726. The Governors provided a room as a ‘Repository for Anatomical or Chirurgical Preparations’. However the scope of this original collection remained rather limited, until Abernethy and one of his assistants came on the scene and recognised the lack of teaching material available in The Museum. Abernethy donated his own private anatomical collection in 1828. By the time of James Paget, the collection was so significant that it took Paget nearly nine years to complete his catalogue of The Museum’s inventory.

Although he was the first ophthalmic surgeon and appointed to be so at Barts by the Governors, he was responsible for a number of other discoveries. Most notably he designed a number of medical instruments including the modernization of obstetric forceps. He also wrote about rickets and was the first to note the importance of removing lymphatic tissue in the treatment of breast cancer.

Freke was a close friend of William Hogarth and was responsible for training Edward Nourse, who in turn trained Percivall Pott.

Surgical teaching at the time was limited to anatomical instruction based on dissection and this took place at The Barber-Surgeon’s Hall and The Surgeon’s Hall in Old Bailey. Their proximity to the hospital may explain in part why Barts surgeons were frequently the invited lecturers and how they came to play such a significant role in the history of surgical training in London. However, there is limited documentation of lecturing taking place at the hospital itself. In 1729, a series of private lectures were advertised to be given by the hospital surgeon, Edward Nourse. Percivall Pott was in attendance and this seems to have been the start of a more structured medical education at the hospital. There was as yet, however, no recognition of a medical school as such at Barts.

Nourse is also remembered in the history of the hospital for having treated Pott after he broke his leg from a fall from his horse.

The Governors of The Hospital continued in their lavish plans for the future of the hospital and appointed James Gibbs to develop new designs, which he did without charge. So influential were the buildings that they have instructed the design of many surrounding buildings of importance that echo his design of the hospital. The building of the new hospital was made possible by donations and the benefactors were rewarded by having their names adorn the walls of The Great Hall in perpetuity. (This was true providing that you contributed before 1905, at which point there was no room left!) 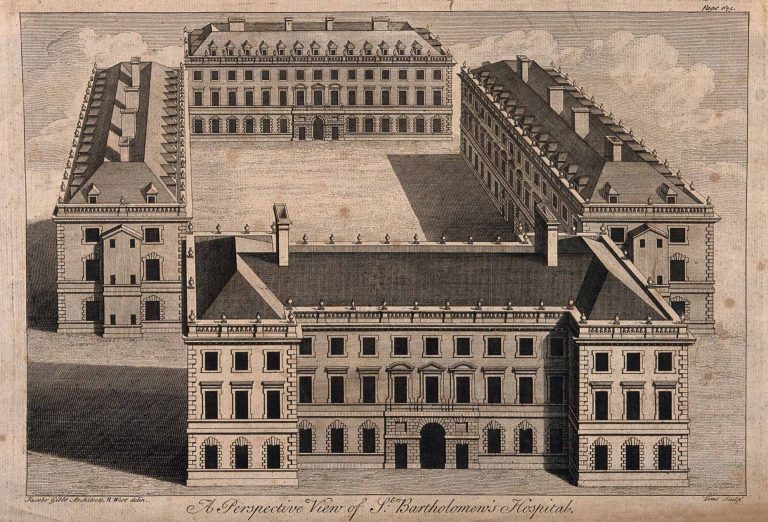 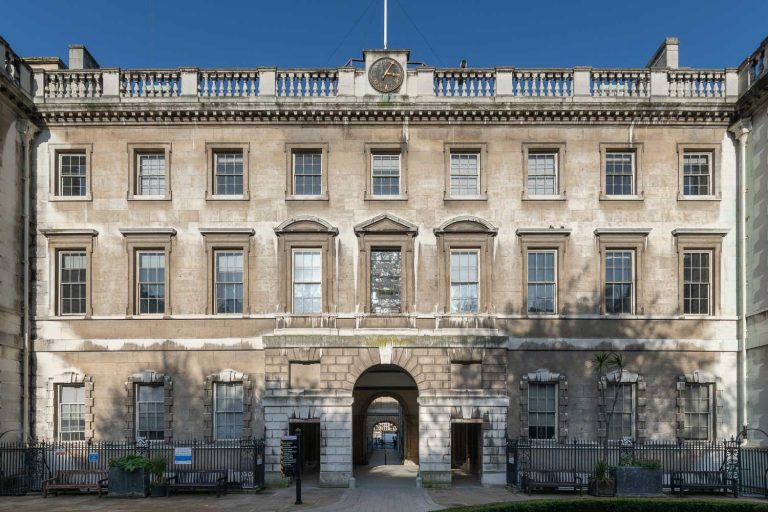 The artist William Hogarth decorated the Grand Staircase with two magnificent paintings that depict the biblical stories of The Good Samaritan and Christ at the Pool of Bethesda and illustrate the spirit of The Hospital’s work. Hogarth was a Smithfield local who was born a stone’s throw from the hospital, in Bartholomew Close, where many of the modern hospital and medical school buildings now stand. He was insensed to discover that an artist from the continent (The Venetian, Jacopo Amigoni) had been approached to provide artwork for The North Wing’s staircase and offered to do so free of charge. The paintings are still used as an educational tool as the characters portrayed are thought to be patients from the hospital, many of whose conditions are recognisable to the trained eye. 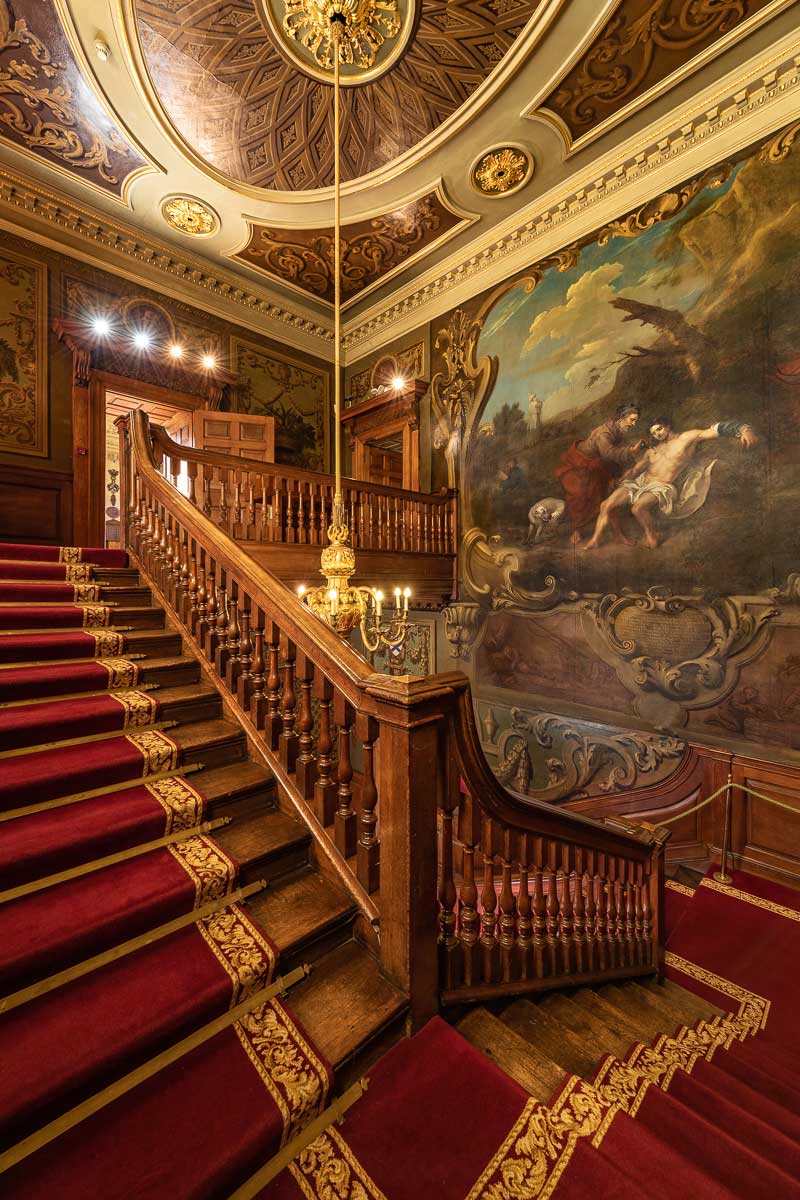 1743: Construction of the West Wing begins

Percivall Pott, the leading eighteenth century surgeon who gave his name to Pott’s fracture and several other conditions, was appointed assistant surgeon. He became a full surgeon in 1749 and remained at the hospital for a further 38 years, retiring a year before his death. Pott was working at Barts at a pivotal time in the history of surgery in London, with the Company of Barber-Surgeons separating, resulting in the newly formed Company of Surgeons in 1745, of which he became Master in 1765. This institution became the Royal College of Surgeons twelve years after Pott’s death in 1800. In 1756, Pott was thrown from his horse, whilst in Southwark and was carried on his order by a makeshift stretcher to Barts, where he was treated by Edward Nourse. It required some argument to avoid amputation (a procedure that Pott abhorred even for his patients!) Contrary to popular mythology, this was not a ‘Pott’s fracture’ (a type of ankle fracture) that he sustained but an altogether more serious open fracture of his femur. Nevertheless, it was during his recuperation that he began writing his ‘Treatise on Ruptures’, published later that year. His other publications included ‘Some Few Remarks Upon Fractures and Dislocations and Remarks on that Kind of Palsy of the Lower Limbs’, in which he described Pott’s disease of the spine. John Hunter, the Scottish surgeon who became George III’s surgeon and for whom the Hunterian Society is named, trained under Pott and his lectures at Barts were also attended by John Abernethy. (An impressive career and legacy for a surgeon reported to have had a great dislike for operating!) 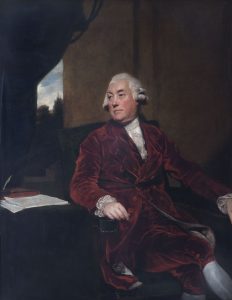 1752: Construction of the West Wing is completed

Gibbs died 15 years before the completion of his designs for the hospital on 5th August, 1754. He left £100 to the hospital in his will.

Building continues after the death of James Gibbs to his original designs.

A Scot and the son of Major Pitcairn, who died at The Battle of Bunker Hill in Boston during The American Revolution, he graduated from Corpus Christi, Cambridge. He was a Gulstonian lecturer and Harveian orator and an elected Physician to Barts from 1780. He was the first to discover the relationship between rheumatic fever and valvular heart disease. He died in 1809 and was buried in the family vault in St Bartholomew-the-Less. 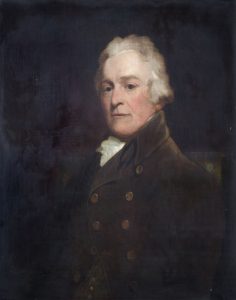 A physician specializing in ‘mad-doctoring’ received his training at Barts before working at the Bethlem Hospital. He later published Observations on Maniacal Disorders (1792), in which he blamed Methodism for mental illness.

The Governors finally approved the construction of a lecture theatre in 1791.